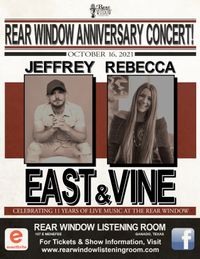 Rear Window Listening Room is excited to welcome back original headliners Jeffrey East and Rebecca Vine to celebrate our 11th Anniversary! Jeffrey East was born into a family band in Dale, Texas, where he grew up watching his par- ents and siblings entertain crowds all of over the state. In 1993, the East family made the move to the Nashville area to chase the dream of music.

But it wasn’t till July of 2005, after his father, and biggest musical influence, was diagnosed with terminal cancer that Jeffrey began writing songs. After losing his dad in January 2006, Jeffrey pursued his writing full-time and landed his first publishing deal with the legendary Harley Allen in September 2006. In May 2010, Jeffrey signed with Zavitson Music Group, where he still writes today.

A prolific writer in any genre, Jeffrey is starting to accrue an impressive list of cuts by artists like Dierks Bentley, Gil Grand, The Grascals, Allan Hall, Jake Mathews, Point Of Grace, and Selah, just to name a few. Most recently, he penned the theme song for the “American Pickers” TV show. As a vocalist himself, if he’s not writing songs, you will find him in the studio singing leads and background on sessions for some of Nashville’s top writers and artists. Rear Window Listening Room is an UPSTAIRS venue. There is a lift chair for those requiring assistance Doors open and dinner is served at 7pm. The show begins at 8pm. Menu to be announced Dinner and Show Tickets $35, Show Only Tickets $20 Rear Window Listening Room is a BYOB establishment. Rear Window is a non-smoking facility