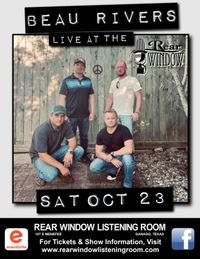 Rear Window Listening Room is excited to welcome Beau Rivers to the stage for the first time! Hailing from Southeast Texas, Beau Rivers is a Texas Rock band with blues and country influences. Their debut EP, “Blood Red Moon” is available now on all streaming platforms. Reviews

“Port Neches based band, Beau Rivers, is shifting the musical waves of Southeast Texas music with their debut album, “Blood Red Moon”. The intricate weaving of imagery, tone and story telling leave the audience with anticipation of wanting to hear, see and feel more. The illusions captured in their second single release, “Drunken Dreams”, create an elusion from reality rooted in shadows of chaos all while demanding control of the facade around him. The texture, tone, and layering produced by the artist himself within “Blood Red Moon” overall is promising, inspiring and leaves us all thirsty for more. ” - Courtney Hale Revia www.beaurivers.com Rear Window Listening Room is an UPSTAIRS venue. There is a lift chair for those requiring assistance Doors open and dinner is served at 7pm. The show begins at 8pm. Menu to be announced Dinner and Show Tickets $30, Show Only Tickets $15 Rear Window Listening Room is a BYOB establishment. Rear Window is a non-smoking facility