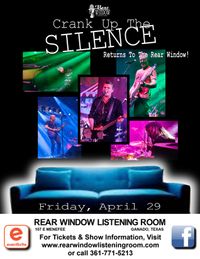 CRANK UP THE SILENCE Returns to the Rear Window

Rear Window Listening Room is excited to welcome Crank Up The Silence back to our stage!

If you listen to the noise of the world, it’s not saying much. If you listen to the silence, you can hear what needs to be said. Based out of the city hailed as the most diverse in the nation, the band CRANK UP THE SILENCE combines compelling lyrics with soulful and driving musicianship. The five band members found each other in Houston’s music scene, but come from four different countries, speak three different languages, and play a myriad of instruments. Their varied musical backgrounds and experiences blend into a common unified language.

Songwriter, lead singer, and guitarist, Leif Måsvær began forming CRANK UP THE SILENCE in 2018 out of a need to use music to say things that weren’t being said – or heard. The four band members he recruited were drawn to Leif’s vision because of the unprecedented songwriting and exceptional talent that would make up this group.

The band name – CRANK UP THE SILENCE – and the band’s logo – an empty couch – are two foundational principles of the band. The empty couch is a symbol of invitation, of deep relationships, and real talk – of dreams, of pain, connection, heartbreak, and shared experiences. And the name, CRANK UP THE SILENCE, is a reminder to listen. To hear. To connect. And to learn from each other.

Blending multiple genres and musical influences from around the globe, SILENCE’s sound has been described as making the “new feel familiar, and the familiar feel new.”

Rear Window Listening Room is an UPSTAIRS venue. There is a lift chair for those requiring assistance

Doors open and dinner is served at 7pm. The show begins at 8pm. Menu to be announced